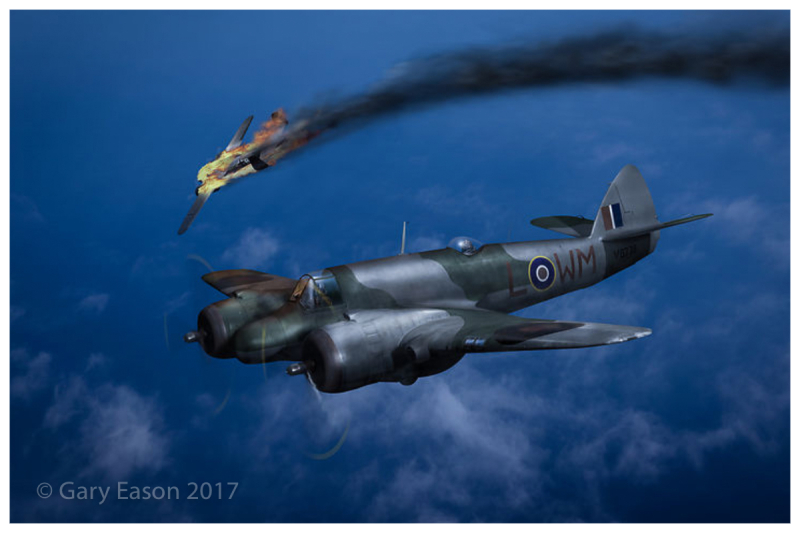 My most recently completed commission gives us an insight into the nature of radar-driven airborne interception in WWII, and the rapid progress in this field that had been made by British scientists.

But it also highlights the Germans' use of a sinister weapon that I had not known about until now.

It's 14 June, 1943. Bristol Beaufighter VI nightfighter V8738, WM-L of No 68 Squadron - seconded to 604 Squadron at RAF Scorton in North Yorkshire - is off the coast of Scarborough liaising with a radar station at Goldsborough, a little further up the coast.

The "Chain Home Low" radar is part of the system used to detect low-flying (down to about 500ft) Luftwaffe attackers since the Battle of Britain, two years earlier.

In the meantime however there has been a quantum leap in RAF night fighter capability. Not only is the Beaufighter equipped with its own airborne radar, it is sporting the latest Mk VIII version that has shifted up a gear into microwave frequencies, vastly improving the accuracy of the system and giving it a range of about 5.5 miles (8.9 km).

Having dispensed with the need for external aerials, this is now housed in a cone-shaped dish within the dolphin-like nose extension fitted to the Bristol Aeroplane Company's twin-engined aircraft.

At about 0130 they are suddenly diverted to try to intercept raiders approaching from the east and south-east at about 5,000ft. Their sector controller directs them for about 15 minutes then hands them back to CHL Goldsborough and a Flight Lieutenant Ross.

"I have some trade for you," he tells them, according to the secret RAF Intelligence Form F and their combat report, filed later.

After a few slight adjustments to their southerly course, they get a radar "contact" about 3.5 miles away at their 4 o'clock, on a bearing of 280 degrees (back towards the coast), doing 230 knots (about 264mph).

German pilot Oberleutnant Friedrich Fritz Sünnemann, 33, hails from the little medieval town of Aschersleben in Saxony-Anhalt. Over the past four years he has flown Junkers Ju 52 and Ju 86 aircraft, Heinkel He 111s and Dornier Do 17s.

He is now flying Do 217s with 5./KG-2, based at Soesterberg in The Netherlands. He and his three crew - observer Heinz Orchel, wireless operator Gerhard Duwe and gunner Heinz Oesterle - are part of a raid comprising six other KG-2 Do 217s and 33 Junkers Ju 88 bombers from KG-6 that are intending to hit the port of Grimsby in three waves.

Wills swings the RAF night fighter onto a south-westerly heading and closes gradually to about 1,000ft behind the Dornier, when he can see its silhouette against the clear, brightly moonlit sky.

At a range of 600ft, directly behind it, Wills thumbs the cannon firing button and the four 20mm Hispanos under the Beaufighter's nose send 118 rounds towards the Dornier.

The front of it explodes. Bits "flew off in all directions". Taking no evasive action, the enemy aircraft falls away to their starboard "in a mass of flames" and they see it hit the sea, debris burning on the water for some time.

My depiction of these events was commissioned by the son of Flying Officer Wills, who has his logbooks covering his first training flights at Moose Jaw in Canada in 1940, right through until he retired from flying in the RAF in the early 60's.

His entry for this night notes the enemy aircraft as, he thought, a Junkers Ju 188 – although the intelligence report says it was "thought to be a Heinkel He 177".

It is only with the benefit of post-war research, the assistance of a Luftwaffe and Allied air forces discussion forum, and various databases, that I was able to point to the only likely casualties of the night's events.

I was struck by the clinical precision with which the intercept was carried out on the RAF side. We expect this sort of technology-driven warfare these days; perhaps not so much in 1943.

But there is a horrible twist to this story that you might not have heard about. I hadn't.

Although Wills brought down one of the raiders, most got through – and inflicted terror on Grimsby that people still remember. As well as high-explosive and incendiary ordnance, the German aircraft were carrying so-called "butterfly bombs".

These Sprengbombe Dickwandig 2kg, or SD2, were - in modern parlance - cluster sub-munitions. The aircraft dropped a casing that burst open to deploy 23 of the "bomblets": 76 mm (3 in) long iron cylinders that flipped out "wings" - hence the name. These spun in the airflow to arm a fuse. They had only 225g of explosive but could kill people within at least 10m (33ft) and maim over 10 times that area.

Even worse, their fuses were often delayed. So they were strewn around and looked like objects of curiosity – especially to youngsters. And there were several thousand of them all over Grimsby and Cleethorpes.

The result was that 14 people were killed during the raid – and some 47 over the next day.

I cannot say whether the Dornier that Wills and Ledeboer shot down was carrying these munitions. Are they what scattered in all directions so explosively when their cannon shells struck it?

Circumstantial evidence suggests that might have been the case and that the RAF airmen, with their airborne radar technology, prevented at least some of them being dropped on the port. 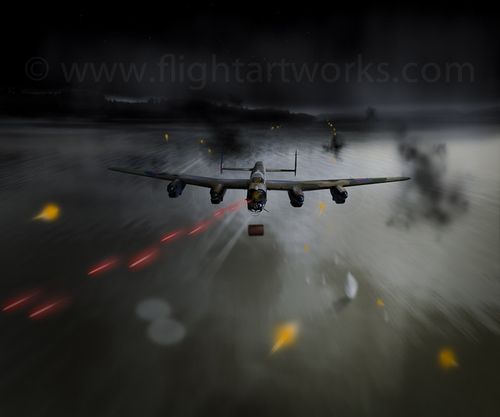