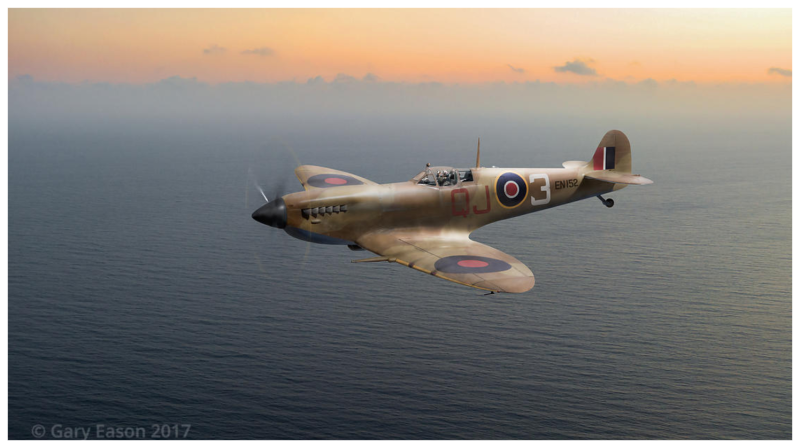 Maybe it is the relative unfamiliarity but I think there is something undeniably cool about the desert camouflage the RAF and Allies used in their combat operations in North Africa and the Mediterranean during WWII.

Dark earth and mid stone paintwork, scuffed by the sand and faded by the heat and dust, blends perfectly with the landscapes they were operating over. My latest picture highlights it by isolating the aircraft over water, but with complementary light on the horizon.

The guys who had to fly, maintain and live alongside these aircraft in such inhospitable conditions might take a different view but to me, the grit of their endeavours as the battle ebbed and flowed across North Africa only adds to the drama.

You might have seen my picture on the Battle of Britain Memorial Flight (Official) page on Facebook.

My commission was to recreate a particular Spitfire: a Mk IXc, EN152 - QJ-3 as it was coded with No 92 (East India) Squadron in the Desert Air Force. This is the scheme that their IXe, MK356, is going to be repainted to represent - while retaining its very different broad chord rudder and cannon configuration.

As so often I was working with a fuzzy, black-and-white photograph as the basis for my artwork. But it did mean I knew for sure what the aircraft looked like. Anyone familiar with the tropicalised "lantern jaw" Mk V Spitfires, with the hulking great Vokes dust filters under their chins, might be surprised to find that these Mk IX variants had nothing like that, just the short carburettor air intake tucked under the fuselage.

Their impact on the air warfare was inspirational though. Whereas the Allied pilots had found their mounts completely outclassed by the latest German Me 109 and Fw 190 fighters, they were now right back in the game.

Having a photograph also meant educated deductions could be made about colours - but a red herring (or should I say, yellow one) had to be dealt with too.

From what I can glean, 92 Squadron used either red or a sort of blue-grey colour for its identifying letters, QJ, depending on the flight of aircraft. In the photo they were obviously dark, so much so they are all but illegible. Probably red, then. The '3' on the other hand was clearly white.

In Tunisia in the spring of 1943 you might expect the airscrew spinner to have been red. But it very obviously is much darker than the grey shade of the known reds: those in the red, white and blue (and yellow) fuselage roundel and fin flash in the photograph. Almost certainly it was black - or more likely 'night'.

The only caveat was that the photo had no date but there is another photo of another 92 Squadron aircraft,  EN458 (QJ-10) captioned Bou Goubrine, Tunisia, spring 1943, which has the same colouration.

The yellow herring: the standard C1-type RAF roundel these aircraft wore at this time had a yellow outer circle. The trouble was that in our fuzzy photo there was no sign of it. Had it been omitted for some reason?

In the end I reckoned a more likely explanation was the nature of the film and/or the filtering used in the camera or processing, making the yellow invisible. I soon found other photos of 92 Squadron aircraft in which the same thing had happened - including two photos of one particular aircraft, Squadron Leader Jefferson Wedgewood's Mk V, BR476, both taken in Libya in late 1942. In one of these there is almost no discernible yellow and in the other it is plain as day (albeit in monochrome obviously).

The overall desert camouflage scheme itself was not something I have had dealings with before. Having looked into the subject, it throws up the old familiar can of worms you get with almost anything about WWII aircraft. A reasonable assumption would be that EN152 had had its desert colours applied at the factory, in what was known as the A fighter scheme.

Yet that very obviously did not fit with what I could see in the photo, and it soon became apparent that various desert schemes were in use: not just the A scheme but with its colours reversed (that is, swapped over - not mirrored, as in the defunct B scheme). The key, as so often, was to have a photo of the aircraft in question. I had one, so I went with what I could see.

For now I am offering a solo portrait of EN152 as QJ-3, depicted over the Gulf of Tunis. It is available in the WWII Fighters gallery on my website, and through authorised print outlets. A bigger picture will follow in due course.