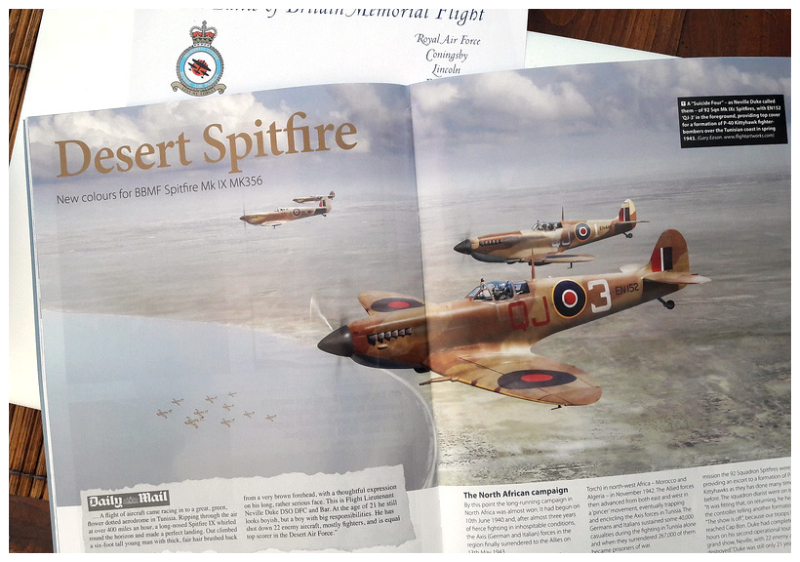 Three recent commissions of mine have now been published in full colour in the RAF Memorial Flight Official Club Yearbook: a terrific read, by the way, and well worth getting hold of even if you are not a member of the club.

They are all available as prints in various formats, sizes and prices through the Flight Artworks website and authorised print partners.

As you can see above I put together a loose 'finger four' of Desert Air Force Spitfire Mk IX fighters from 92 Squadron over Tunisia, which forms the top of a double-page spread. In the foreground is EN152 QJ-3 - the scheme that the Battle of Britain Memorial Flight's MK356 is going to represent (even though it is a different mark). I wrote previously about the research that went into the colour scheme for that.

Another is my dive bombing scene featuring low-back, clipped-wing Supermarine Spitfire XVI TD240 when it was the aircraft of the Officer Commanding No 131 (Polish) Wing, Gp Capt Aleksander Gabszewicz in 1945. It carried his colourful boxing dog nose art. This is the scheme that the BBMF's XVI, TE311, is being repainted to represent. 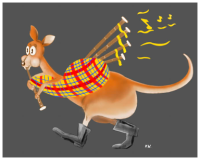 There is more colourful nose art for BBMF Lancaster PA474 as it morphs into W5005, AR-L for Leader of 460 Squadron RAAF at the end of September 1943.

This showed a kangaroo in Wellington boots playing bagpipes - a reflection of the tri-national Australian, Scottish and Welsh crew who commissioned it from squadron artist Vic Watts.

The story of how we pinned down the details of who created the original nose art, and when, and what the colours might have been (only black and white photos exist) bears telling separately in full. Look out for a future blog on the subject.

PA474 is being repainted to depict W5005 on its port side although, following convention, it will retain its own serial number I understand. On starboard PA474 will be the 50 Squadron Lancaster LL922 / VN-T. I have now also depicted that reincarnation.

The latest piece out of the Flight Artworks studio is an air-to-air visualisation of the only extant Supermarine Swift F4, WK275. Its restored (but not airworthy) airframe currently resides alongside Avro Vulcan XH558, sadly no longer flying either.

Swifts were not the most successful aircraft ever deployed by the RAF and not many were made but they had a certain style, I think you'll agree. A very different version of the picture will be appearing as a book cover later this year.

Talking of covers, if you wondered who created the Sea Harrier artwork for the cover of the May issue of The Armourer magazine about the Falklands War - that would be me.

[A version of this article, with a special discount offer, appeared in a newsletter to registered users of the Flight Artworks website]. 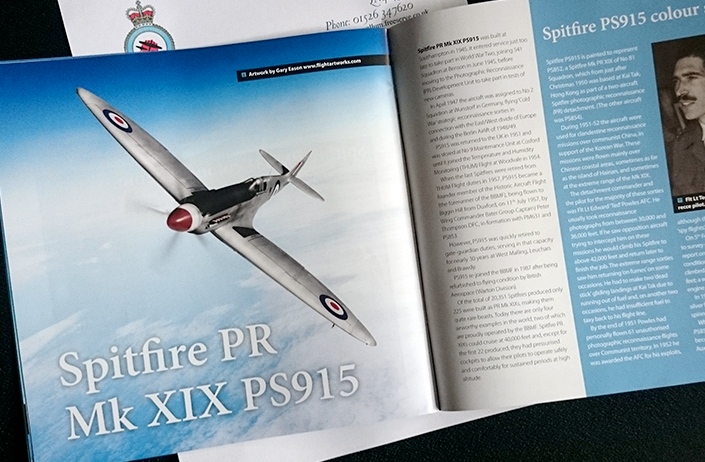 A complimentary copy of the new Official Visitor Guide to the Royal Air Force Battle of Britain Memorial Flight plopped on to my doormat this morning, to my delight.

The reason I have been sent a copy is that the whole of page 34 is given over to one of my pictures, as you can see at the top of this article.

The editor, Clive Rowley, asked if I would be interested in having a shot at making it, to help them out of a hole.

The visitor guide has, as you would expect, articles on all the flight's aircraft, including their history - and why they carry the colour schemes and squadron markings that they do, which change from time to time. In this case, Spitfire PR Mk XIX PS915, one of the relatively rare 225 photo reconnaissance Spitfires made.

For the 2016 season it is going to be in the guise of another of the type, PS852, which was based in the early 1950s with 81 Squadron at Kai Tak, Hong Kong, where it was the usual mount of the record holding pilot Flt Lt Ted Powles.

The trouble was, the guide had to go to press long before the BBMF Spitfire was going to be repainted - so no photograph of it would be available.

Hence the idea of having one of my Flight Artworks depicting the all-silver finish that PS852 bore from 1952 and PS915 will be getting.

We chose to have it almost head-on from a little above. This showed off the long Griffon engine cowling and the very smart red and white spinner on the five-bladed propeller, high above the South China Sea. It also allowed for a composition that could be used horizontal, vertical and square, as required.

The visitor guide is a beautifully put together, 42-page, 21cm (8in) square publication, with a glossy cover whose silky smoothness has to be felt to be believed. Well worth £3 of anyone's money I would say and perhaps you will pick one up if you go to visit the flight at RAF Coningsby in Lincolnshire.

If you want to support the BBMF it is worth joining the official Club - whereupon I gather you will be sent a free copy of this guide as part of the membership pack (see comment below).

If you would like to have a picture of just the Silver Spitfire they are available to order as high quality photographic posters and fine art prints in a variety of sizes - as well as greeting cards and other products - via the Flight Artworks website at www.flightartworks.com, and selected print partners.

The picture is also available to publishers to license via Alamy or you can contact me direct.

Left to right: Recently licensed Flight Artworks scenes from the Phoney War and the Battle of Britain © Gary Eason

You will know already that you can buy aviation prints through the Flight Artworks website at www.flightartworks.com but I also welcome enquiries from publishers who are interested in using my work.

My photographic aviation pictures are regularly licensed either from me directly or, increasingly, through my gallery on the Alamy agency. You can see some recent purchases - for a book - at the top of this column.

And it is not only publishers, editors or authors. I am also happy to talk to people interested in making ranges of aviation-related consumer goods.

For the most part these are rights managed licences of the Flight Artworks, so prices vary widely depending on the particular use - but also licensing my 'straight' aviation photographs from airshows and elsewhere.

On the subject of printing though, a reminder that all my pictures are made to order. They come to you fresh from the printers, and have not been sat in a storage box after being run off in batches. This applies equally to the photographic prints of aviation pictures and to the fine art prints, in a range of sizes. 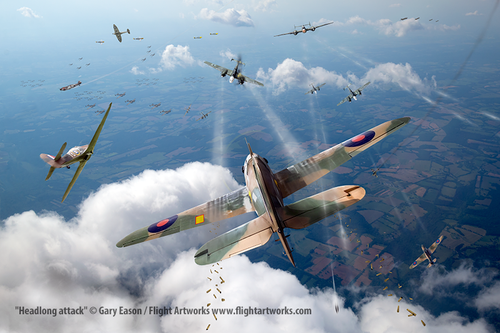 As prefigured in a previous post, the Battle of Britain Day 'big picture' I was working on in February has duly appeared across two full pages in the Official Royal Air Force Memorial Flight Club Yearbook 2015, which has now gone to club members.

I won't reproduce that picture again here but you can find it, and order prints, here on my website. One of the articles inside the yearbook is 'Spitfire or Hurricane? (... or Me Bf 109?)' - which was the best fighter? This features two more of my pictures.

The one at the head of this blog post, 'Headlong Attack' – which itself is quite a big scene, about events over Weymouth on 25 August 1940, which I have written about before – and this one below, illustrating the shooting down of a 109 on 8 October 1940 by Ronald 'Ras' Berry of 603 (City of Edinburgh) Squadron, Royal Auxiliary Airforce: 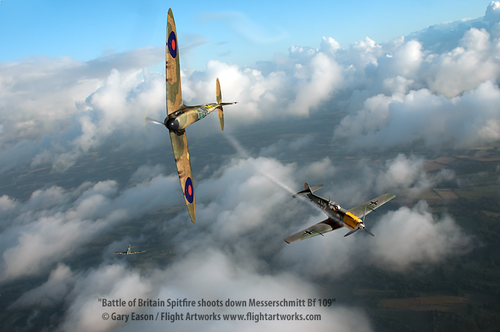 It's a thoughtful article from the perspective of a former fighter pilot, Clive Rowley. I think the pictures look great, and I am delighted to have had them chosen for such a prestigious publication.

And if you have any interest at all in the historic aircraft so superbly maintained by the Flight, then I recommend joining the Official Royal Air Force Memorial Flight Club.

If nothing else, you get a copy of the Yearbook!

Battle of Britain Spitfire for magazine 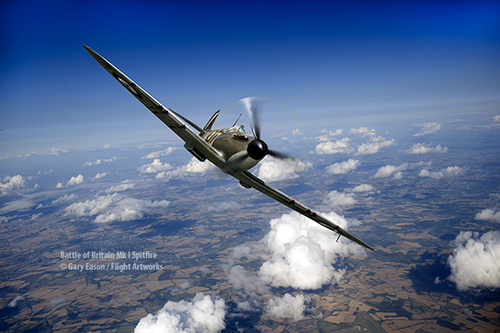 Apart from all that spring stuff the month of May brought with it issue 16 of History Revealed magazine - whose cover features one of my Flight Artworks aircraft.

The Spitfire was commissioned by them to fit a rather precise slot in that front page, as you can see if you click on the link - after attempts to source a ready-made one had taken them to my Alamy account. There, they found things they liked but they were not quite at the right angle.

Creditably they were also anxious to be sure the details were authentic for the period. So I worked with them to get just what they wanted - which was as near to a "standard" Battle of Britain Spitfire as they could.

I chose Spitfire R6891, DW-Q of No 610 Squadron, based at Biggin Hill, as flown by Sgt (later Wing Commander) Ronald Fairfax Hamlyn DFM. This was in part because there were some reasonable (for the time!) old pictures around of his aircraft, so I knew it was just the ticket.

Hamlyn - "The Pied Piper of Harrogate" - became the RAF’s first 'Ace in a Day' of World War II, shooting down five enemy aircraft during three sorties on 24 August 1940.

I also subsequently adapted this for my own purposes in the picture you see at the top of this page.