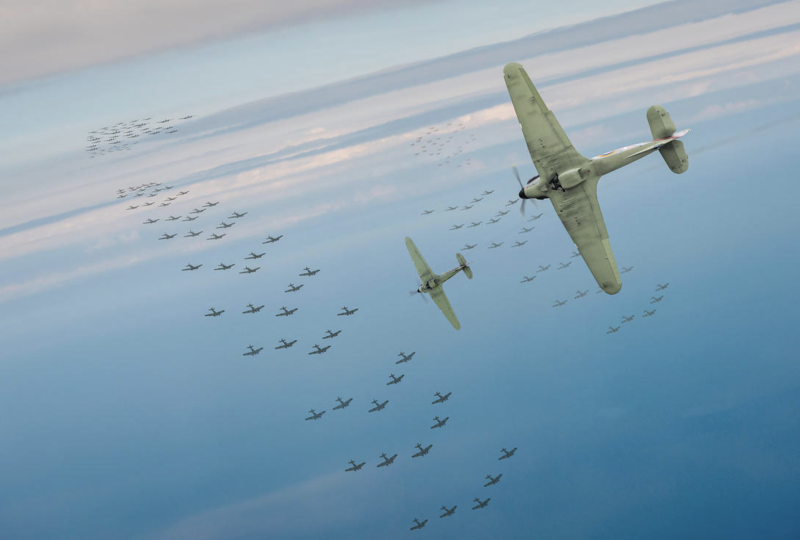 "The Few" © Gary Eason: available in the Battle of Britain gallery on the Flight Artworks website

I was wondering how to start this article when Hylton Murray-Philipson came up with the answer.

Mr Murray-Philipson spent 12 days in Leicester Royal Infirmary and five days in intensive care with coronavirus disease. Speaking to the BBC as he was finally discharged, he compared the NHS staff to "the Spitfire pilots of 1940".

Any of us with even a passing interest in historic aviation will be well aware that 2020 marks the 80th anniversary of the Battle of Britain, characterised by "The Few" Spitfire and Hurricane pilots fighting a heroic struggle against apparently overwhelming odds for months on end.

That conflict would have been my own main focus for the next few months, but events have rather overtaken us all.

It's striking how the crisis engulfing the country - indeed the world - has left people struggling for comparisons, and typically falling back on WWII in terms of the scale of this, its life-threatening nature, and the indiscriminate impact on ordinary people.

We're living through probably the most extraordinary times most of us have ever known, and obviously this has had a huge impact on businesses of all sorts.

I am extremely lucky - and well aware that I am - in that I work from a home studio anyway, mostly on my own, and lead a rather lockdown sort of life in that respect, so I can carry on doing so (health permitting) without too much interruption.

The print companies who supply my customers however have been impacted to a greater or lesser extent. Some of them have lost a huge amount of regular trade from larger clients. So I am keen to support them where I can by continuing to send them orders.

I'm acutely conscious for close family reasons that many people have less money at the moment, and possibly uncertain futures. But an ideal pastime if you're stuck at home is to browse through this blog and the Flight Artworks website. They're not just pretty pictures: most of the stories they tell involve specific people, aircraft and events, and contain lots of interesting information – and of course they're all free to read.

It might appear that I have not produced much new work recently but I have been steadily busy behind the scenes.

Anyone belonging to the RAF Memorial Flight (BBMF) official club would have been getting their yearbook through the post shortly. Instead, publication has been postponed because of the pandemic.

Having created a couple of new pictures for it and seen advance copies of the articles they illustrate, I know it'll be well worth waiting for. But I'm continuing to respect their embargo so I haven't published the pictures myself yet.

Recent licensing deals include two of my pictures for the end pages in a forthcoming book about a certain well-known aircraft type. I am reliably told by someone who's read a proof copy that the book is "completely brilliant".

Another features an aerial melée from November 1940 (after the official end of the Battle of Britain) which involved some very famous names. I had not known about it until I began researching it for the picture I've been making for a client, but it's a fascinating story. Still, that's for a forthcoming blog article.

For now: stay home, keep safe - and if you are one of the frontline NHS staff or other key workers who are putting yourself in harm's way to look after us and keep things going: thank you, on behalf of all of us.