Two for the Hawker Hurricane fans 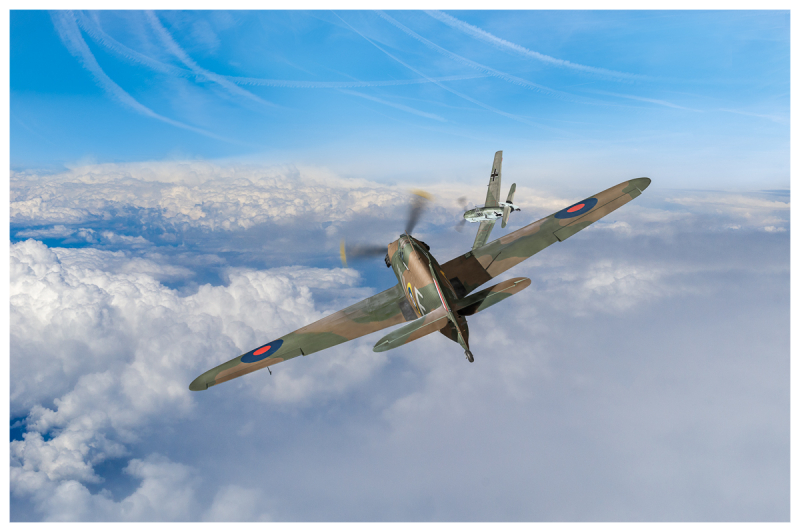 I have been aiming to publish one or two blog posts a month - so I can only apologise for taking six months off!

I was mostly enjoying the long, hot English summer and keeping well out of the sweltering studio. So it is not only the writing that has been neglected but also the picture-making. But as the days shorten, I am back at the desk and have a few things to catch up on.

Members of the RAF Memorial Flight Official Club will have seen a couple of the images I did produce in their autumn journal: a commission to illustrate a book extract about baling out of a doomed Lancaster, and another to accompany an article about the tricky skill of deflection shooting.

It is not always immediately apparent to the uninitiated that unless you are right behind (or right in front of) your target at very close range, if you point your aircraft at another and fire – you will miss it.

You are moving, it is moving, and time will elapse during which your ammunition is flying through the air and falling under gravity. You have to shoot at where you anticipate it will be when your bullets reach it.

In my picture (top), the Hurricane pilot has positioned himself in just the right place that if he fires now, he probably will hit the crossing Messerschmitt Bf 109.

Eventually the RAF woke up to the importance of the issue and set up a gunnery school in 1942, but widespread success really only came to most fighter pilots with the introduction of complex gyro gunsights in 1944.

Until then, only a small percentage of fighter pilots managed to hit anything consistently. During the Battle of Britain, this was not for want of targets. 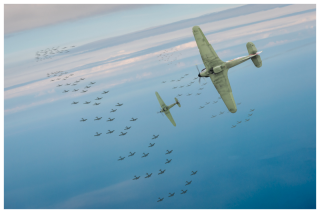 My second Hurricane offering is one of those pictures I had had in my mind's eye for some time. It shows a pair of the eight-gun fighters turning in line astern onto a mass of attacking German bombers, a scene typical of the intense combats in the summer of 1940.

No visible markings under their wings? The RAF's twisting and turning policies on the subject of camouflage on the top and bottom of their different aircraft types have filled books.

My depiction is of fighters of No 1 Squadron RAF over the south of England on 16 August. Underwing roundels had been dropped in June, when the Air Ministry ordered all fighters to have 'sky' colour undersides. They were reintroduced officially on 11 August but that does not mean to say they instantly appeared overnight and, in the absence of definitive information, I decided to omit them.

The squadron's operations record book reported: "In the afternoon the squadron was engaged in its most successful action in England to date."

Squadron Leader David Pemberton made the first attack, bringing down one of the Heinkel He 111 bombers in flames with his first burst. His own engine then caught fire - possibly because of returning gunfire - but before he had decided to bale out the flames subsided, and he landed safely.

Pilot Officer Peter Matthews followed him in, picking out one of the Messerschmitt Bf 110 heavy fighter escorts for his attack.

This was the day on which Prime Minister Winston Churchill visited the headquarters of RAF Fighter Command's 11 Group at Uxbridge and saw that at one point during the heavy aerial combat, all the Group's fighter squadrons were in action, with no reserves.

As he left, Churchill said to his chief of staff, Hastings Ismay: "Never in the field of human conflict has so much been owed by so many to so few."