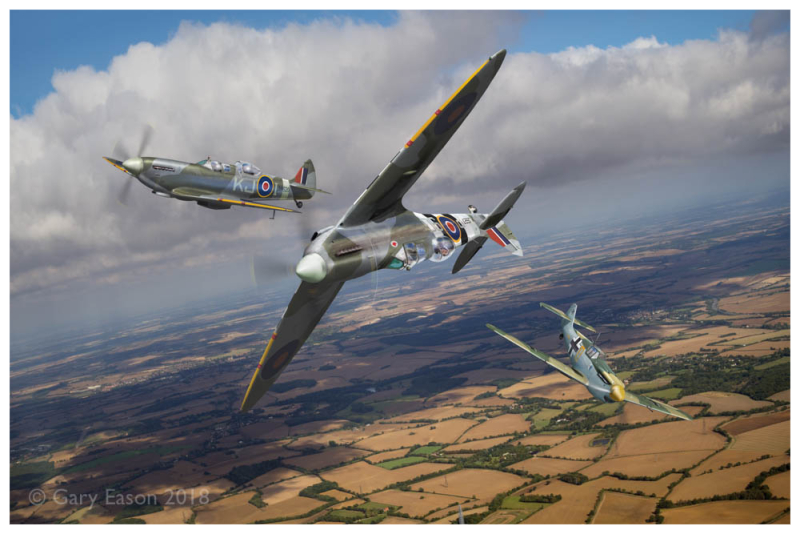 This one turned my usual work upside down.

The normal Flight Artworks brief is to use the 'time travel' button on my custom-built Nikon camera (cough) to create high-resolution colour pictures of aircraft – mostly from WWII, when there was a lot of aerial combat and very few photographs.

A client who has been lucky enough to have made several flights in various warbirds, including three Spitfires, asks if I can recreate the "untoppable experience" of a fighter affiliation trip with another two-seat Spitfire and a Hispano Buchon in Messerschmitt Bf109 markings.

He has some photographs from the day, taken on the ground and in the air. In which case, I wonder, what does he want me to do?

When I see them I get the point. It was a dull day with low cloud, and possibly rain – and it is very hard to convey the overall experience when you're in the back of one of the Spitfires. He is looking for something that reminds him of the overall sensations.

The essential set-up was a tailchase. Following my usual practice, I sketch something that has the Spitfires up front - with 'his' in the foreground - and the Buchon off to the rear. I substitute a sunny day with fluffy clouds.

He would prefer to have them all in the front of the frame and after juggling various ideas my fifth sketch hits the spot: "That's it - you've nailed it - that will look glorious."

And so to work.

Which brings me back to where I started. The gloriously restored and maintained 'warbirds' that we see flying around are, understandably, so lovingly cared for that they positively gleam. Under wartime constraints that had to come low on the list of priorities.

There is a theoretical debate to be had about the nature of paint finishes, cleaning, polishing-for-speed and so on – but in practice, in general terms, working aircraft looked up-close ... well, rather like the boot sill of my car on a February weekend after the dogs have been tearing around in the muddy woods all afternoon.

To that end, I keep a stock of textures in Lightroom that are layered onto pictures I'm making as "grime", "grubbiness", "smears", "streaks" and so on.

For this picture, with three beautifully presented, preserved aircraft to depict, I was instead having to find out much more about applying reflections – which proved to be a very useful exercise in both observation and Photoshop work.

In the final composition, all three are turning in the same direction but the centrepiece, with my client in the rear seat, is coming in over the top and partly inverted.

His mount for the day was Supermarine Spitfire MJ627 in the markings of 9G-P of 441 (Silver Fox) Squadron, Royal Canadian Air Force (RCAF), the unit it first served with as a Mk LF.IXc in 1944. 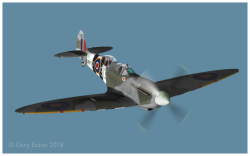 From what I have read, after the war it was converted to a two-seat trainer for the Irish Air Corps, but subsequently pillaged for spare parts until it was purchased for restoration in the 1970s, eventually flying again in 1993.

It has continued in flying trim ever since, apart from repairs after a forced landing in the late 90s, and is now operated by Warbird Experiences Limited at Biggin Hill. Since the flight depicted here - which was in 2014 - it has been re-coded as 9G-Q, its first operational designation, with its D-Day stripes pared down to the undersides only. 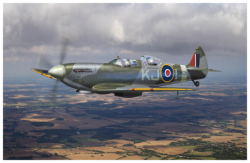 The other Spitfire is SM520, built in 1944 but not used operationally until being sold to the South African Air Force (SAAF) four years later. It suffered two accidents and was sold for scrap in 1954.

A quarter of a century later some of its major parts were recovered and eventually returned to the UK as a restoration project, involving conversion to its current TR 9 two-seat configuration. It is now owned by Boultbee Flight Academy and flies in the markings of an RAF two-seater that was converted from a 4 Squadron SAAF Mk V Spitfire in Sicily: KJ-I.

The Buchon is a film star. HA-112-M1L wears the 'Yellow 10' markings it wore as one of the stand-ins for German Luftwaffe Messerschmitt Bf 109s in the 1969 film Battle of Britain. 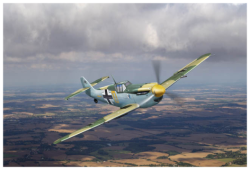 These were Spanish-built versions of the 109 which used Rolls-Royce Merlin engines, like the early Spitfire marks.

This machine, built in 1959, was one of a batch of aircraft given to the American pilot Wilson 'Connie' Edwards for his work on the Battle of Britain film. Sold back to UK owners in the 1990s it is now operated by Historic Flying Ltd, based at Duxford airfield in Cambridgeshire, with the UK registration G-BWUE.

Not having a model of a TR.9 to hand to work from, my starting point was a Mk IX which I then had to cut up and rebuild digitally. This is not just a case of shoehorning in the extra rear seat, but also involves moving the front cockpit forwards by just over a foot (0.3m).

So, not my usual cup of tea but very interesting to work on. When I began the picture I was not particularly fond of the tandem Spits; they just looked messed about, to my eye, a corruption of the superbly elegant lines of the Spitfire airframe.

But I have to say they grew on me, and now I think the shape works rather well. And I should think none of us would object to being put in one!

I learn from the fascinating Two Seat Spitfire Page on Facebook that there are currently eight airworthy two-seaters in the world and no fewer than six in various stages of repair/restoration and construction. So whatever you think of them, we are going to be seeing more in the skies.