Remembering those who never made it into battle 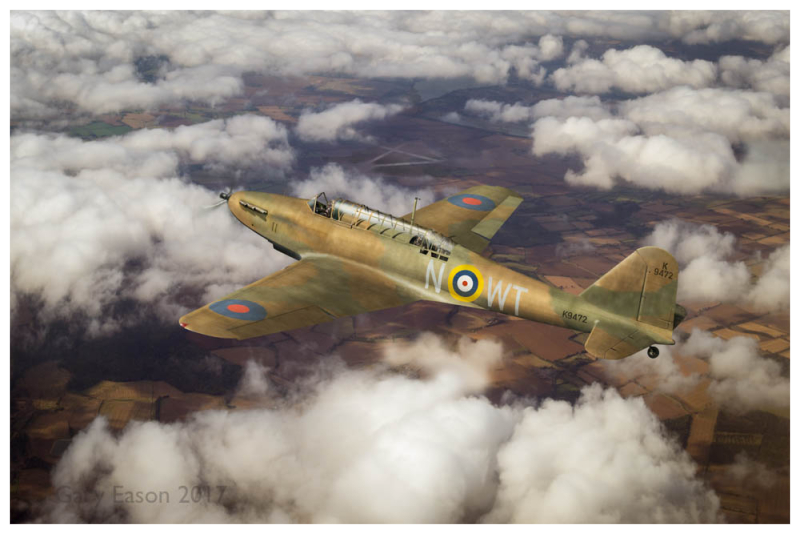 Two stories in one this time related to my latest picture (above), Fairey Battle Mk I K9472, WT-N of 35 Squadron - and in fact two pictures.

The most obvious story involves the aircraft itself, depicted in flight near RAF Carew Cheriton in Pembrokeshire.

I have shown the crew in a happier moment, but K9472 was departing for some air firing practice on 29 October 1939 when the engine failed shortly after take-off.

"Should have landed straight ahead - not attempt to turn back on failing engine," it adds.

The Battle crashed and caught fire near to the tidal mill on the bank of Carew River, by Carew Castle.

All three on board were killed: Rhind, the pilot, plus his two crew: Bernard Connor and Ewart Wynne Looker. My picture was commissioned by Ewart Looker's brother, who has generously donated a print to the museum at Carew Cheriton Control Tower: look out for it if you are visiting.

The version of this picture that I made for him depicts the rear cockpit open and his brother manning the .303 Vickers K machine gun, which swivelled up into position from its stowed space in the fuselage.

It was interesting to research the aircraft. I had paid barely a passing glance to the restored one in the RAF Museum in London – which, I know now, had been recovered from a crash site in Iceland.

Fairey Aviation Company's design probably seemed like a good one when it was drawn up in the mid-1930s, with two little bomb bays in each wing, a .303 machine gun (just one) in the starboard wing and provision for a gunner with a similar size weapon at the back. The RAF ordered more than 2,400 of them, with I believe some 2,100 being delivered.

The heat and rapid pace of war however showed the Battle to be vulnerable: overloaded, underpowered and lacking defensive armament.

This has tended to make it a prime candidate for lists of "worst aircraft of WWII", but I think there is merit in the argument that its use as a light bomber in daylight and often unescorted doomed it to fail: no aircraft would have fared better.

During the Battle of France in 1940 Battles were deployed on low-level attacks against German troops and were shot to bits by ground fire and by Messerschmitt Bf 109s – much as the Germans' apparently successful blitzkreig dive bomber, the Ju-87 Stuka, was by the RAF's fighters when it crossed the English Channel.

So arguably it was not the aircraft that was wrong but the tactics.

It is worth remembering that thousands of aircrew died during WWII not as a direct result of enemy action but in bad weather or in training or other non-operational flying like this.

The obvious perils of inexperience were compounded by the pressing need to get aircraft and aircrew into service as rapidly as possible, once the threat of war turned to actual conflict.

According to the RAF Museum, courses were shortened and capacity increased at flying training schools – except that equipment was in short supply, as were qualified flying instructors.

It was not until 1943 that the RAF really caught up with itself in terms of training enough aircrew.

Our pilot in this case had done his basic training in Perth then at No.10 Flying Training School at Ternhill, Shropshire, and had held his 'wings' for five months. The Air Ministry Form 1180 reporting the accident records that he had flown 204 hours solo, 37 on this type of aircraft.

Whatever its shortcomings as a fighting machine the Battle reportedly was straightforward to fly; a good training platform. This particular one, K9472, had been in service for nine months.

It also used the Rolls-Royce Merlin engine, a Merlin II in this case. Merlin variants would become legendary in Hurricanes, Spitfires, Lancasters and Mosquitos, but the early ones had reliability problems, as our three young men on the training flight found to their cost.

Had they not been killed that October and had gone on to operational squadrons in Bomber Command, losses there were so high they would have had about a one-in-two chance of surviving the war.

When it came to making my picture, I had to plump for one of at least four possible camouflage schemes, if I understand it correctly.

A scheme (left) and B scheme

The Battles carried what was known as the temperate land scheme of dark earth and dark green, so that much is certain. And this was drawn to a pattern – but the pattern had two versions, A and B, which mirrored each other (right).

In addition, each of those could have the colours swapped. So that's the basic four possibilities. But from the photos I have seen, there seemed also to be variants within those patterns.

In the absence of actual photographs of the specific aircraft it boiled down to artistic licence.

I spent a good while studying the various markings that were applied to Battles in terms of wing and fuselage roundels, fin flash (or at this time, the absence of one), serial number (K9472) in black, most probably duplicated on fuselage and rudder, and squadron code letters in grey – WT-N in this case, but following the practice of having the individual letter towards the front and the squadron pair of letters (WT) aft of the roundel, so N-WT in my port side composition.

Not only did policy on all of these evolve as the RAF approached and went into actual combat, practice varied from squadron to squadron and, on any given squadron, between aircraft depending on newness, state of repair and repainting and so on.

I have not seen a single photograph of any 35 Squadron aircraft of this type, so I just gave it my best shot. If anyone has any photos, by the way, I would be delighted to get sight of them.

Whatever else you might say about the Fairey Battle's performance I think it looked good from any angle and makes for a fine portrait of an early WWII RAF fighting machine. 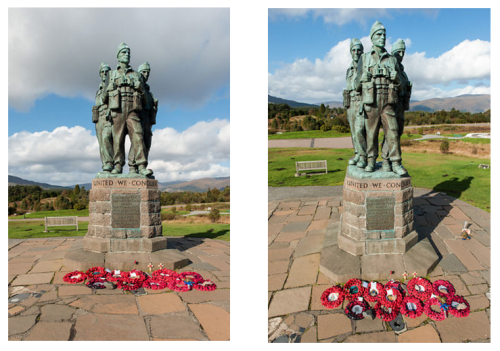 A very well known statue, this: the Commando Memorial just outside Spean Bridge in the Highlands of Scotland.

Three giant commando soldiers look out over the landscape that was their training ground in WWII.

The statue, created by the Scottish sculptor Scott Sutherland (1910 - 1984) using actual former commandos as the models, was unveiled in 1951.

An earlier photograph of mine created in 2010 is one of my best selling pictures. But the location is one I pass regularly on my forays into the far north and in sunnier weather four years later I made a few more photographs there.

Striking though the location is, the sheer monumentality of the bronze on its plinth, at 17ft (5.2m) high and on an elevated paving platform, means that unless you stand a long way off then the view of it is very much looking upwards.

I also wanted to try to get a more eye-to-eye depiction, which resulted in the second of the photographs at the top of this page.

There are very many photographs of this statue but mine is the only one I have come across that offers this perspective on it. Here's how it was done.

I was on this trip to make landscape photographs so I had not taken along my monopod, but I did have my lovely Giotto GTMTL9271B tripod (which was stolen a couple of weeks later when my car window was smashed).

Onto that went the D700 with 24-70mm zoom set at 24mm, on its side, and the whole package was hoisted at arm's length into the air to get the shot, framed using live view on the rear LCD screen.

Easier said than done. The camera, lens and tripod combination came to well over 5kg in itself. But this is a very exposed location at the best of times, and what you cannot tell from the sunny aspect is that it was blowing a hooley at this particular time. So hoisting the rig was one thing but holding it steady up there was quite impossible.

Incidentally, if you are thinking a drone would have made easy work of this job, there are two problems with that: I doubt it could have been launched that day because of the wind strength; secondly - I don't have one!

So it was a grab: I set the self-timer for 5 seconds, made ready, and hoisted just as it was about to fire. ISO 100, f8, 1/350. I got everything nicely framed and exposed, as the sun dodged in and out behind the clouds, on the fourth attempt, which felt like good going in the circumstances.

Finally however, if you compare the shot and published versions shown here, you can see that I tweaked the lens distortion, warmed up the colour balance - and removed the distracting vehicles from the background.

For this portrait-shaped view I kept in the remembrance wreaths at the base of the plinth. There is also a wide version where the statue itself dominates the scene.

TO BUY PRINTS  of any of my landscape works please visit the Places galleries on my website.