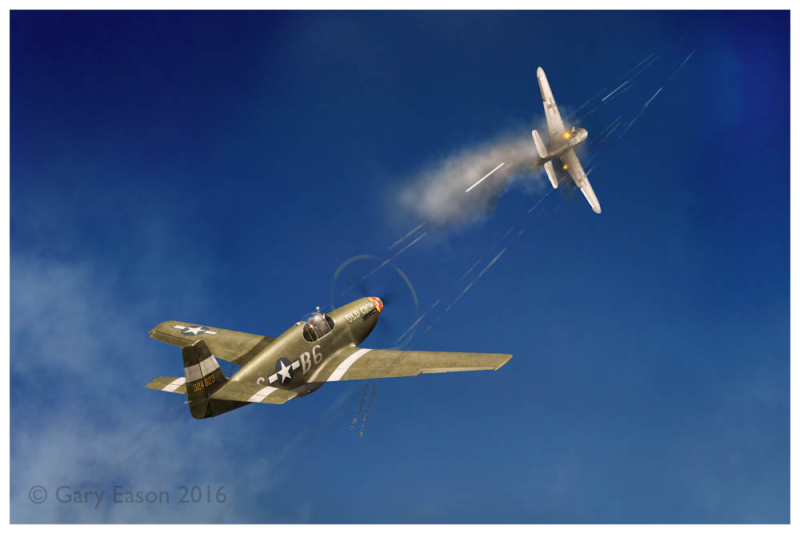 This depiction is based on gun camera footage

My latest picture, Six miles high (above), shows the culmination of the knuckle-whitening dogfight during a bomber escort mission in which US Mustang pilot Bud Anderson shot down a Luftwaffe Me Bf109G.

The story is told in his memoirs, To Fly & Fight, and is so gripping it is pulled out of chronological order and made into the first chapter. He has also described it in interviews, his hands characteristically doing much of the talking as he explains the various manoeuvres. I'll just give you the gist if you don't know it, and hope my picture does some justice to the scene.

It happened on 27 May 1944. Anderson's unit, the 363rd Fighter Squadron, 357th Fighter Group, based in Leiston, Suffolk, on the east coast of England, were escorting the US Eighth Air Force's largest bombing mission so far in WWII, against the rail marshalling yards in Ludwigshafen-Mannheim.

They have just made their rendezvous point when German defence fighters pounce on the head of the bomber stream. The flight of four P-51 Mustangs gets into a turning fight with a bunch of 109s. Anderson finds himself behind one of them and opens fire, knocking pieces off, eventually sending it upside down then into a spin.

One of the remaining pair of 109s breaks off and makes for home, but the other pulls up into a sharp climb. Anderson and his wingman engage. They get into a turning fight; he tells his wingman to break clear. They reverse their turns. Now he climbs, with the 109 and the "elephant gun" (MG 151/20mm cannon) in its nose coming behind him.

As gravity eventually overcomes engine power they hang in the air ... and the 109 stalls out first,  before managing to get in the shot.

Then the situation is reversed: through another twist, the Messerschmitt goes zooming straight up and the Mustang follows and Anderson knows – from what has just gone before – that his enemy will stall first. He closes, skids the Mustang's nose to the left, and fires a long burst from the Browning machine guns, seeing bright flashes on the wing root, cockpit, engine....

In the film from the gun camera on Anderson's aircraft you can see the smoke engulf the centre of the 109 before it stalls to the right and falls – which it does, straight down from perhaps 35,000ft through the sunny May morning.

He had lived and his opponent had died, but he says it could easily have been the other way round and what made the difference probably was the aircraft.

In my artist's eye I have tried to step out of that gun camera and depict the scene. Anderson did stress the "crystal clear" blue sky. Adding a little cloud is my only bit of artistic licence, based on feedback while I was making the picture. I think without it, it is difficult in two dimensions to get a sense of depth – or rather height, in this case.

In case any eagle-eyed observers are thinking I have the control surfaces crossed - with the rudder going left and the ailerons turning right - remember Anderson deliberately "skidded" his aircraft to line up the guns.

So far as I know, the identity of the German pilot has not been established. I believe the Luftwaffe lost at least 17 fighter pilots that day.

I have read that II/JG53 lost four 109s and II/JG27 lost six, after intercepting B-17 "Flying Fortresses" and their P51 escorts "southeast of Nancy" – which chimes with north-east of Strasbourg where Anderson placed the action. All this in the top corner of France, of course: they were attacked earlier than Anderson had been expecting on their way to the target.

Unlike some veterans, he has not tried to find out the names of the 16 enemy fighter pilots he shot down in aerial combats of this sort.

He said: "He was someone who was trying to kill me, is all."