EXCLUSIVE: I gather that the Battle of Britain Memorial Flight's Lancaster, PA474, will have not one but two new paint schemes following its winter service.

The left-hand side will be painted as 460 (RAAF) Squadron Lancaster W5005, coded AR-L "Leader", which had nose art of a kangaroo playing bagpipes, indicating the Australian and Scottish backgrounds of one of its crews. (Some sources say this was on JB607 AR-N, but I am reliably informed this is a case of mistaken identity).

The right side will carry the 50 Squadron code letters VN-T, representing the Lancaster flown by FO Douglas Millikin DFC – grandfather of the BBMF's current Officer Commanding, Squadron Leader Andy "Milli" Millikin, on 27 of his first tour of 30 operations.

PA474, the only Lancaster currently still flying on this side of the Atlantic, recently moved from its base at RAF Coningsby to the Aircraft Restoration Company's magnificent newly-opened Stephenson Hangar at Imperial War Museum, Duxford, for a major service, following which the repaint will also be carried out.

The decision on the new colours was confirmed this week and announced at the flight's end-of-season guest dinner by Sqn Ldr Millikin. His grandfather's crew's wireless operator, John Tait, was at the dinner.

The original Lancaster W5005 completed at least 44 operations while it was with 460 Squadron at RAF Binbrook in Lincolnshire, including four to Italy and four to Berlin, between 1943 and 1944.

It was then transferred to 550 Squadron, where it kept its nose art but was recoded BQ-N.  It made another 50 trips and was well on its way to becoming one of the rare 'centurions' (more than 100 operations) when it was ditched in the Humber Estuary as it was returning to RAF North Killingholme from an attack on Kiel in August 1944. No-one was injured but the aircraft was lost.

The Australian War Memorial's collection has a photo of its nose art as it was in August 1943. The chap in the pilot's seat is Flight Lieutenant Alexander Stuart MacWilliam DFC, who was the squadron's gunnery officer: he had no direct connection with the aircraft. 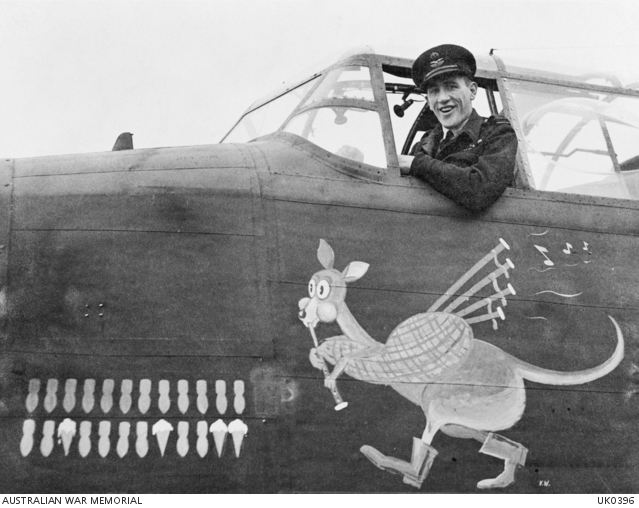