Spitfire and Heinkel in Battle of Britain running fight 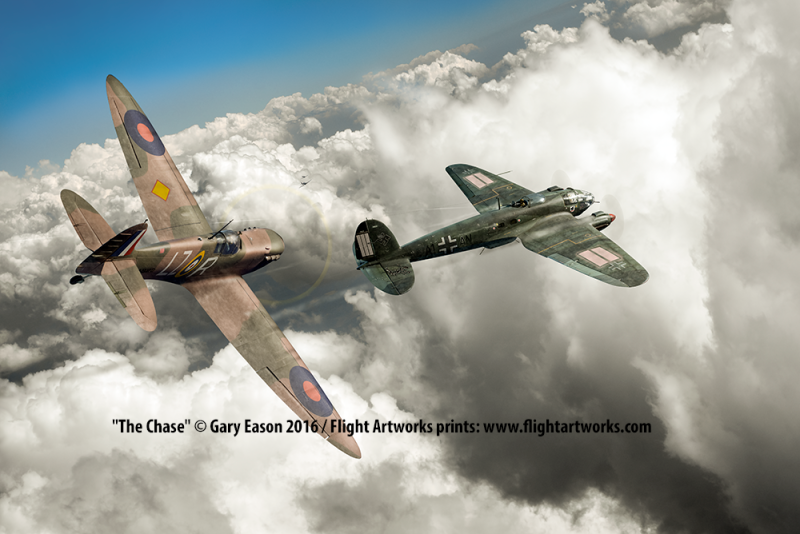 It was a day of huge engagements involving hundreds of aircraft, but time and again it broke down into deadly individual aerial combat encounters.

During the Battle of Britain, RAF Fighter Command's ideal was to knock down the German bombers before they got anywhere near their targets. But the next best thing was to knock them down on the way back, so that the aircraft and their crews could not return.

The second, and largest, came in the afternoon and was engaged by more than two dozen squadrons of Hawker Hurricanes and Supermarine Spitfires. Air Vice-Marshal Keith Park, in charge of No. 11 Group RAF, responsible for the fighter defence of London and southeast England, had thrown everything into the action.

By chance, the Prime Minister Winston Churchill was watching that day in the operations room at RAF Uxbridge. Famously the PM broke his silence to ask: "What other reserves have we?"

"There are none," Park replied.

Despite this onslaught more than 100 German bombers got through to their target areas, to Park's intense annoyance, but the almost complete blanket of cumulus and strato-cumulus clouds meant they could not find them, and bombs were scattered over a wide area of London.

The Heinkels and Dorniers then turned for home. Inevitably some aircraft became separated from their units and began cloud hopping as they made their way back over Kent in an effort to escape attention. They were harried all the way by a succession of RAF squadrons.

One of the extraordinary features of this kind of fighting was that the Luftwaffe aircraft returned across the Channel sometimes riddled with holes from the .303 rifle calibre ammunition used by the British fighters. But they were not always so lucky.

Piloted by Fw Kurt Behrendt EKI, it was attacked by numerous Hurricane and Spitfire fighters. The one I have shown is a 66 Squadron Spitfire, X4322, LZ-R, flown as Green 2 in 'B' flight by Flt Lt Robert Oxspring.

In his combat report Oxspring said he made a stern attack, opening fire at 250 yards and closing to 50 yards. He broke right  and carried out a quarter attack following to stern attack on the starboard engine, which started to smoke immediately – the action shown in my picture.

He crossed over again and shot up the other engine, passing through some cloud in the process, and finally running out of ammunition. He watched the Heinkel glide down – left engine eventually stopping, the other trailing smoke – and land at RAF West Malling aerodrome in Kent still under attack by other fighters, some of which also landed there.

The Heinkel slithered to a standstill in a cloud of dust and smoke with two of the five crew dead and two wounded.

You might wonder about the pink bars I have shown on the Heinkel's rudder and wings. Some, but not all, Luftwaffe bombers displayed similar markings in the later part of the Battle of Britain – coinciding with these massed raids, which has prompted the general assumption that they were formation markings of some sort although the subject has exercised historians, who are unsure as to their purpose.

One, two or three white or very often pink bars are described in RAF intelligence reports. The crash report on this Heinkel mentions three vertical pink bars on the rudders but oddly makes no reference to the wings, possibly because they were fire damaged? I say oddly because Oxspring, in his account, referred to the enemy aircraft's camouflage as being "olive green with black crosses, and two square painted panels on top surface of the wings, of a pink colour."

I have had to interpret this in light of other photographic and documentary evidence, and bearing in mind that his report was almost certainly dictated to and typed by someone else so it has that "proceeding in a westerly direction", stilted tone familiar from police witness statements. I have depicted rectangles rather than actual squares, because Heinkels are known to have had these.

One thing that is clear from contemporary photographs is that the markings appear often – though again, not always – to have been hastily applied, with sometimes a lot of overspray around the bands.

Even then, did Oxspring mean two squares on each wing, one on each wing, or two on one wing (and if so, which?). This is a classic case where the destruction of Luftwaffe records at the end of the war leaves us with a mystery. If you know of a German account that explains these markings definitively, I would not be the only one that would very much like to see it.