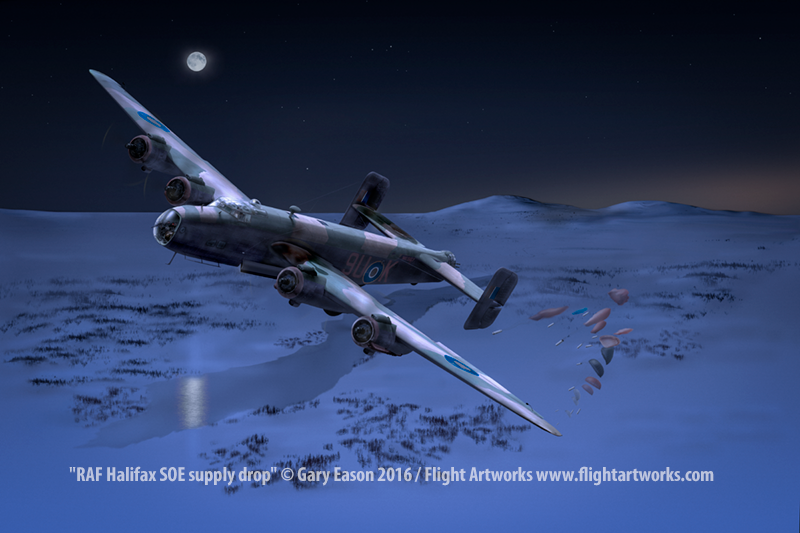 All my commissions prove to be interesting one way or another, that is the nature of the subject matter.

I usually learn something along the way, to a greater or lesser extent. Greater, in the case of my most recently finished piece, which depicts a 644 Squadron RAF Halifax Mk III banking left after making a SOE supply drop in Norway on the night of 25 February 1945.

The aircraft, ME967 carrying the squadron codes 9U-K, returned safely to England after a round trip of 10 hours 50 minutes. It was this long journey time that caught my eye when I was asked if I could make a picture by the son of the flight engineer, who was Sgt James McBurney from Carrickfergus in Northern Ireland.

I reviewed the operations he had been involved with during his time on 644: a mixture of bombing, glider towing and SOE drops. The sheer length of this trip across the North Sea to Norway stuck out, and the mission was rather less than ordinary. So that became the subject.

SOE was the Special Operations Executive, a secret branch of the British military in WW2 that was tasked with running agents, sabotage and helping resistance movements in enemy-occupied territories. SOE had an uneasy relationship, to put it mildly, with the established armed forces.

The RAF initially objected to having any of its precious aircraft diverted to non-core objectives, especially when they were regarded as disreputably underhand – which of course was the whole point of SOE's work.

Nevertheless by 1945, when this operation took place, co-operation was routine. The operations record book for 644 Squadron, based at RAF Tarrant Rushton in Dorset, noted:

For information about the DZ - drop zone - I had the benefit of one of the appendices to the squadron records in the National Archives, the crew's "parachute raid report".

In it they recorded having taken off at 1711 (just after 5pm). DZ 60,26,00N  11,07,30E  was identified by "ground reception, as briefed". Unfortunately there is no record of what that was: it might have been lights or even radio communication with the ground.

That location is in a remote wooded area in SE Norway, to the north east of Oslo: on the west shore of Tisjoen lake. The topography is largely low lying. As an aside, I have never been to Norway but from photographs that part of the country is uncannily similar to an area I do know in Minnesota in the USA, where about a third of the population is descended from Nordic immigrants, including about 17% from Norway.

There was no cloud and visibility was excellent. I looked up the Moon's position and it was waxing gibbous at 97.2% - all but full - on a bearing of 162˚ and an elevation of 44˚.

"No hang ups, all chutes opened", the report reads. They returned to base at 0417.

This makes it all sound very straightforward, but in the "Observations" section we see just how dangerous this sort of trip was: the crew watched on their way back as one heavy aircraft was shot down by intense heavy flak over the coast, burning on the sea for two minutes.

The aircraft was a Mk III Halifax with a crew of six: pilot, air bomber, air gunner, navigator, wireless operator and flight engineer. I took this as confirmation that it was one of the Mk III variants that had no mid-upper gun turret.

It is the first time I have completed a Halifax picture and found it a very attractive, purposeful airframe. I intend to reversion this as a more straightforward 'portrait'-type, air-to-air scene, and I am sure other scenarios will follow. As well as learning about the aircraft, its various types and roles, I also read up on SOE and on the development of supply containers and parachutes.

Next on my plate however is something utterly different. Watch this space.