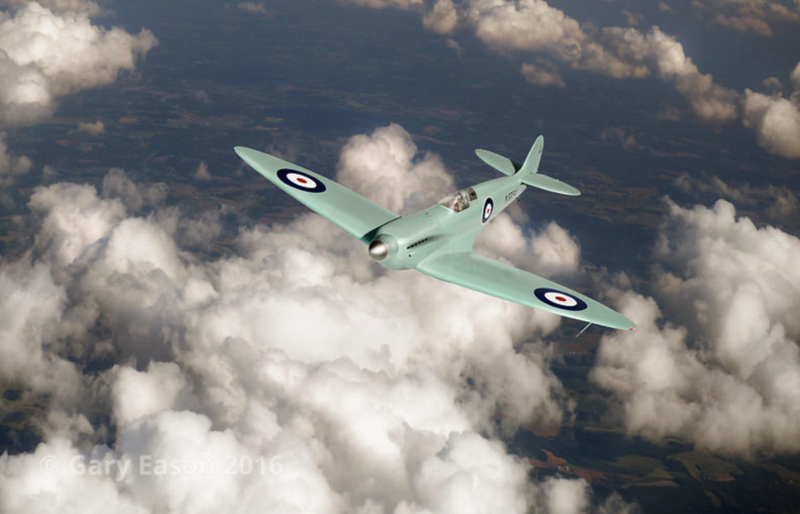 If things have seemed serenely quiet lately, rest assured I have been paddling furiously below the waterline.

I am delighted to have announced a new picture this weekend: the prototype Spitfire K5054. The usual range of prints is available here in the 1936-40 gallery on the Flight Artworks website.

This is one of those pictures I have had in my mind's eye for some time. I was finally prompted to make it by the anniversary of the first flight 80 years ago of the prototype Vickers Supermarine Type 300 – to be named the Spitfire.

I chose to depict it in its unashamedly pretty early livery, before it acquired warlike camouflage. It was a delight to work on, it is such a beautiful thing. Sculpture in flight. You know the old adage that if an airframe looks right it will fly right: it was obvious from the outset that this was going to be a brilliant machine.

What a terrible pity that its designer, RJ Mitchell CBE, did not live to see the legend that his invention would become.

As an aside, anyone who has researched it will know that debate continues to this day as to quite what shade of blue, grey or green it was painted – at first, soon after, and not long after that. I am not going to join in.

I would like to say a brief thanks to all my latest print buyers. There has been an upsurge of interest recently – not least because of the double-page spreads featuring my depiction of 602's Finest Hour in the March issue of Britain at War magazine.

Another exciting licensing development should be appearing soon but I won't say any more about that until the exclusive item is available – except to reiterate to publishers that if you have a hole to fill, whatever shape, please do ask me about creating something suitable.

Meanwhile I have been working on some complex but thrilling pictures about a quite extraordinary event. Under wraps for now but it has involved a considerable amount of time – one of those scenes that make me ponder my general policy (so far) of pricing all pictures in essentially the same way, by print size. Should a 'simple' photo cost as much as something that took me two weeks to make, along with often considerable incidental expenses?

Swings and roundabouts, or flexible pricing? As always, your thoughts on that or anything else are welcome. I enjoy the e-mail or social media dialogues.