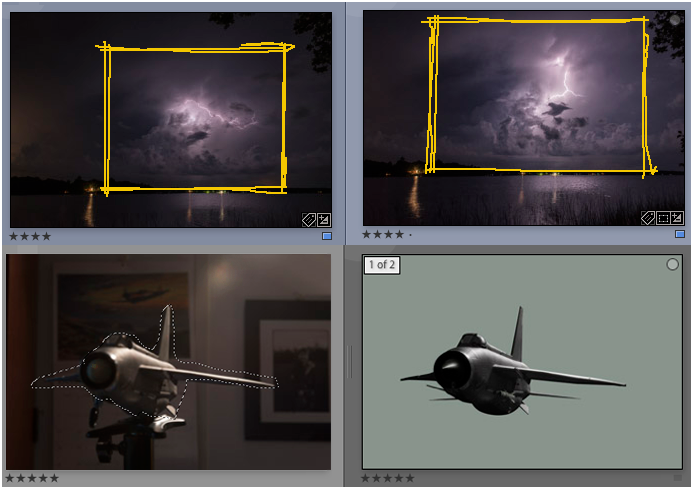 Snippets from the creative process

This is about art imitating life without even realising it.

I often carry around pictures in my head for ages without getting around to making them. I might even have the ingredients to hand, but it takes a nudge of some sort to get me started on a particular image.

In this case, someone on Facebook asked me if I had any pictures of the BAC (EE) Lightning. That was the spur I needed finally to get around to making one.

I already had the backdrop - from a series of pictures made during one of the frequent thunderstorms at our family holiday place in Minnesota, USA. I blended a few of these together to get the composition I wanted, but other than that it is real Lightning. I believe there are Photoshop techniques to try to mimic it but they never look satisfactory to my eye. 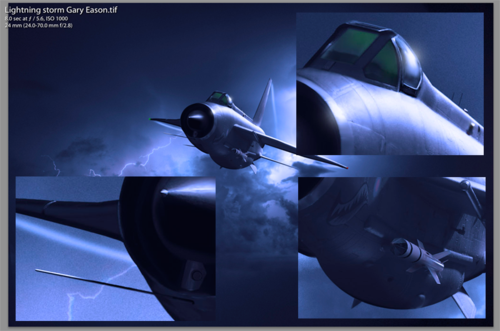 The Lightning is a superbly made (not by me!) scale model, which I lit starkly from behind and photographed to suit the scene, using focus blending to get an appropriate depth of field. I then went to work adding or adjusting details and finally harmonising the whole [see detail crops]. You can see the finished picture here.

As my pictures go then, this was a fairly straightforward one. I happened to mention it to former RAF Lightning pilot Clive Rowley. He was concerned to be sure that the gun pack was there on the front of the ventral tank (it is, just hard to see in the shadow) and he pointed out that an F6 would have been more likely to be toting Redtop missiles rather than the Firestreaks I had used, although they weren't wrong.

Otherwise he thought the picture "clever, if a little frightening to a pilot!" - which prompted one of his anecdotes:

"I was hit by lightning once in a Lightning, in cloud," he recalled.

"I was recovering to Binbrook and coasting in over Spurn Point, on minimum fuel as always [Lightnings were notoriously fuel-thirsty], for an instrument approach in thick cloud, when there was a bright flash and a loud bang, which was disconcerting to say the least. Being such a steam-driven, non-electronic aircraft, everything seemed to be functioning normally except the radar, which failed.

"After I had landed safely we discovered that the lightning strike had burned a hole in the radome in the nose air intake."

The radome on a Lightning is the distinctive pointed nose cone, which I believe was made from glass fibre.

Clive added: "Being hit by lightning in a Lightning has always seemed to have a certain ring to it, but it’s not a memory I would like to perpetuate by having that particular image on my wall!"

Happily for me my Facebook enquirer loved it and ordered a print straight away.

She later reported back: "Arrived today and it is superb, even the Postman said 'wow' when I opened it, thank you for your very prompt service."

Here's a funny thing: I started drafting this blog post then had to break off to run someone to the rail station. On my way back I realised I was following a van belonging to a company that does lightning strike protection testing. I kid you not.