A complimentary copy of the new Official Visitor Guide to the Royal Air Force Battle of Britain Memorial Flight plopped on to my doormat this morning, to my delight.

The reason I have been sent a copy is that the whole of page 34 is given over to one of my pictures, as you can see at the top of this article.

The editor, Clive Rowley, asked if I would be interested in having a shot at making it, to help them out of a hole.

The visitor guide has, as you would expect, articles on all the flight's aircraft, including their history - and why they carry the colour schemes and squadron markings that they do, which change from time to time. In this case, Spitfire PR Mk XIX PS915, one of the relatively rare 225 photo reconnaissance Spitfires made.

For the 2016 season it is going to be in the guise of another of the type, PS852, which was based in the early 1950s with 81 Squadron at Kai Tak, Hong Kong, where it was the usual mount of the record holding pilot Flt Lt Ted Powles.

The trouble was, the guide had to go to press long before the BBMF Spitfire was going to be repainted - so no photograph of it would be available.

Hence the idea of having one of my Flight Artworks depicting the all-silver finish that PS852 bore from 1952 and PS915 will be getting.

We chose to have it almost head-on from a little above. This showed off the long Griffon engine cowling and the very smart red and white spinner on the five-bladed propeller, high above the South China Sea. It also allowed for a composition that could be used horizontal, vertical and square, as required.

The visitor guide is a beautifully put together, 42-page, 21cm (8in) square publication, with a glossy cover whose silky smoothness has to be felt to be believed. Well worth £3 of anyone's money I would say and perhaps you will pick one up if you go to visit the flight at RAF Coningsby in Lincolnshire.

If you want to support the BBMF it is worth joining the official Club - whereupon I gather you will be sent a free copy of this guide as part of the membership pack (see comment below).

If you would like to have a picture of just the Silver Spitfire they are available to order as high quality photographic posters and fine art prints in a variety of sizes - as well as greeting cards and other products - via the Flight Artworks website at www.flightartworks.com, and selected print partners.

The picture is also available to publishers to license via Alamy or you can contact me direct.

Seat of the pants flying 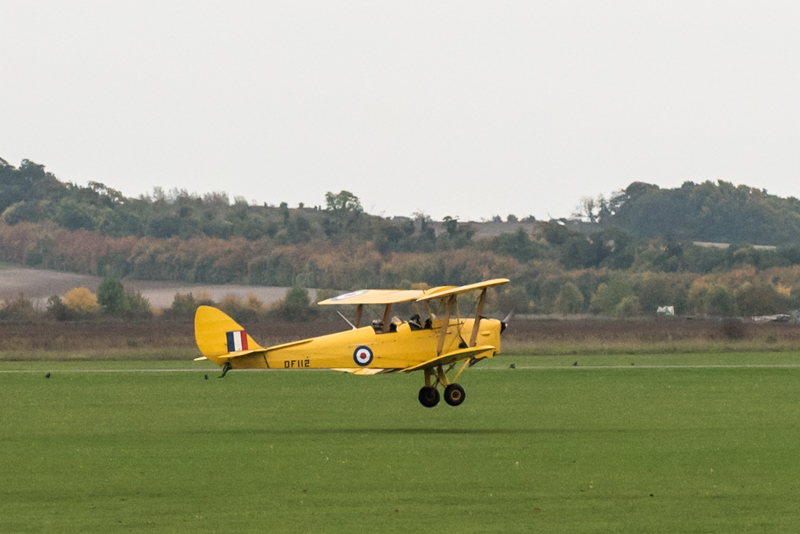 The blog gets a new profile picture: me in old-fashioned leather helmet and goggles and looking very pleased with myself because I had just been for a flight in a Tiger Moth biplane.

Apart from some gliding years ago, all my GA flying has been in the usual types: mostly Cessna 150s and 172s, Pipers of differing sizes and so on. All with the sort of three-point seat belt you find in a car and increasingly, over the years, with a fine array of instrument technology: the last Cessna I was in had an entirely 'glass cockpit', with two big LCD screens.

It is the exceptions that are the most memorable. A Piper Cherokee that I jumped out of twice, for charity, at Ipswich Parachute Centre. A Cessna 150 Aerobat in which my chum used to take us somersaulting around the hills of North Wales when I worked in Shropshire years ago.

"Golf Alpha" (G-BFGA) was a Rallye 150ST in which I had my first proper flying lessons, at Denham Aerodrome (EGLD), Buckinghamshire. That was flipped upside down and trashed overnight  by the 'October Hurricane' - so that dates me.

And now a bright yellow DH.82A Tiger Moth II in the markings of the RAF basic trainer it used to be. Hence the grin on my face.

Being helped in to a four-point harness with a centre buckle concentrates the mind, as does the functional sparsity of the interior, control wires visible. The instruments are so basic there isn't even an artificial horizon.

Pinch myself: I am flying at IWM Duxford, wartime home of Bader's Big Wing and now the venue for some of the best airshows. Amazing in itself.

There is no lid on a Tiger Moth. It is noisy and a bit windy - hence the requirement for a helmet - and there is remarkably little forward visibility even in the front seat. I presume the windscreen is there to, well, screen you from the wind and stop flies and debris hitting you, because you certainly can't see much through it.

But being able to lean out to the side and look around in the fresh air is a delight. And the flying sensations are marvellous. Bumping around a bit at 1,000ft, the harness holds you snugly so that you feel part of the machine, of it rather than in it.

My pilot, hugely experienced ex-RAF and commercial airline captain and instructor Andrew McNeile, was charming company. He did the take-off and the final part of the landing, on grass runway 24, and pretty much let me fly the rest so far as I could tell.

Continuing the "back to basics" theme, there are no brakes: you just let the tail settle and drag, which stops the small airframe smartly.

I know some long-time pilots who have never been in a tail dragger, let alone an open cockpit biplane one designed in the 1930s. Have a go, you will love it.

It was all too brief, and unfortunately they make you give back the fantastically comfortable sheepskin flying jacket. Of course I now want to go again.

My flight was arranged through Classic Wings at IWM Duxford in Cambridgeshire as a gift from my partner. They also operate a T6 Harvard. And, following changes in the CAA (Civil Aviation Authority) rules, you can actually fly in a T9 Spitfire. Just saying.