Left to right: Recently licensed Flight Artworks scenes from the Phoney War and the Battle of Britain © Gary Eason

You will know already that you can buy aviation prints through the Flight Artworks website at www.flightartworks.com but I also welcome enquiries from publishers who are interested in using my work.

My photographic aviation pictures are regularly licensed either from me directly or, increasingly, through my gallery on the Alamy agency. You can see some recent purchases - for a book - at the top of this column.

And it is not only publishers, editors or authors. I am also happy to talk to people interested in making ranges of aviation-related consumer goods.

For the most part these are rights managed licences of the Flight Artworks, so prices vary widely depending on the particular use - but also licensing my 'straight' aviation photographs from airshows and elsewhere.

On the subject of printing though, a reminder that all my pictures are made to order. They come to you fresh from the printers, and have not been sat in a storage box after being run off in batches. This applies equally to the photographic prints of aviation pictures and to the fine art prints, in a range of sizes.

A Mk I Spitfire and a PR Mk XIX silver Spitfire: my latest Flight Artworks 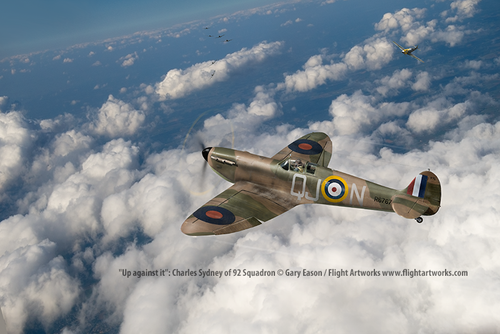 "Up against it": F/Sgt Charles Sydney of 92 Squadron

The house and office move mentioned in the Preface to my first book was completed relatively painlessly as these things go, although the unpacking and decluttering took longer than I had imagined.

I then spent a delightful few weeks in the US this summer, and have only recently got back into the groove. Consequently it has been a while since I have written anything, so this is by way of  a catch-up.

My first priority on return from holiday was a commission for the RAF Memorial Flight (BBMF). This came about because one of their Spitfires - PR Mk XIX no. PS915, is being repainted to represent another of its kind that achieved a certain amount of fame in the early 1950s.

Spitfire PS852 of 81 Squadron, RAF, was used by Flt Lt Ted Powles AFC to make unofficial daring spy flights over Chinese territory during the Korean War, pushing it to the extreme limit of its fuel range.

He also took it to a world altitude record for piston engine aircraft of 51,550 ft (almost 16 kms high!) on 5 February 1952. When the cabin pressurisation malfunctioned he then made an extremely fast descent, although the actual speed he attained is disputed.

The Memorial Flight repaint is going to be in the colours PS852 wore when it was based at RAF Kai Tak, Hong Kong. The exact date of the original colour scheme is uncertain, but there is a blurry photo from 1954/55 that shows how it looked: overall 'silver', which was actually RAF Aluminium. 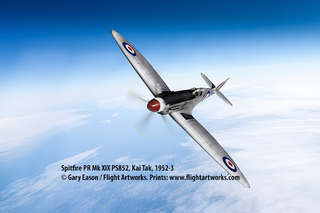 The Memorial Flight Spitfire's repaint has not been done yet but they need pictures for their publicity materials - and that is where I came in, with my depiction of the original. Here's a small version (right): look out for it if you are visiting RAF Coningsby.

I love the way this picture has turned out. When you see it full size the Spitfire seems to leap out of the frame.

Incidentally, while researching this I came across a delightful book by Valerie Ann Penlington called Winged Dragon: the History of the Royal Hong Kong Auxiliary Air Force. It features that blurry photo of PS852 on page 100, as well as lots of colour ones of aircraft and pilots, and a string of flying anecdotes. There is an enthusiastic review of it on this website.

At the head of this article is my next project, produced for the man who maintains a memorial in south-west London to one of The Few - unsung hero Spitfire pilot Flt/Sgt Charles Sydney of 92 Squadron, who was killed in one of the many engagements between RAF Fighter Command and the Luftwaffe on 27 September 1940.

A ceremony is being held, along with many others this year, to mark the 75th anniversary. I was asked to depict his aircraft, Spitfire R6767, coded QJ-N, and here you see the result.

According to the squadron's operations record book in the National Archives, Sydney had already made one short sortie from Biggin Hill that morning, from 0710 to 0740. He was one of nine pilots ordered up again at about 0845. It is a bleak record: he is marked "Missing" and two of the others "Crashed".

At the time, the fighting on the 27th was regarded as having been very intense. The Prime Minister, Winston Churchill, was moved to send a message the following day to the Secretary of State for Air, Sir Archibald Sinclair, which read in part: “The scale and intensity of the fighting and the heavy losses of the enemy ... make 27 September rank with 15 September and 15 August as the third great and victorious day of the Fighter Command during the course of the Battle of Britain."

Understandably there has been a heavy focus recently on the Battle of Britain, with numerous magazine specials, TV programmes and social media comment. Indeed I am writing this on 'Battle of Britain Day' (15 September) and a flock of WWII fighters has just gone past within earshot of my office, part of the mass flypasts that began at Goodwood.

Next however I am going to be turning to a very different phase of World War II, featuring the memorable attack by RAF Bomber Command near the village of Mailly-le-Camp in the Aube area of north central France.

To set the context, if you do not know it: as part of the build-up to D-Day, 346 Lancaster bombers and 14 Mosquitoes were sent out on the night of 3/4 May to bomb the German military barracks near the village.

Communication difficulties forced a delay before they could bomb. It gave the defenders time to get organised. While circling the target under clear skies and a bright three quarters moon, and on the way back, the Lancasters fell prey to numerous German night fighters. A total of 42, almost 12% of the attacking force, were shot down: a loss of some 300 men.

Despite the heavy RAF losses that night the attack itself was very successful.

Mailly-le-Camp marked a turning point however. Until then there had been a perception that the long hauls to Germany and back were far more perilous operations than the softening up of enemy positions in France prior to D-Day, which sometimes were even characterised as "milk runs".

This extended to the official view of how many successfully completed operations a crew should have to make to complete a tour of duty. Ordinarily this was 30 but the shorter trips to France were being counted as only one third of an op - until several of them, and notably Mailly-le-Camp, showed just how deadly they could be. The policy was changed.

One thing is certain: anyone who was there would never forget it. But - spoiler alert: I will say no more at this stage about the picture I am making. Watch this space.