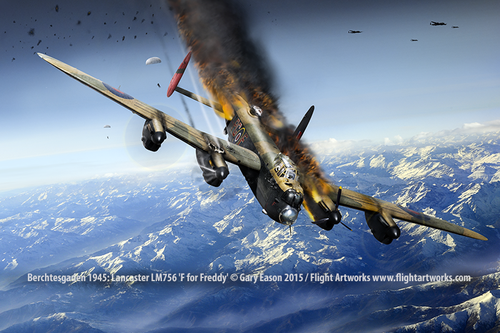 There is an interesting story around all the pictures I get asked to make, but it is usually about the original circumstances that are being portrayed.

In the case of this latest commission however there is also a story behind why the picture itself came to be made, and where it is going.

It depicts the shooting down of Lancaster LM756, PG-F of No 619 Squadron RAF, during a daylight operation against Hitler's Eagle's Nest retreat at Berchtesgaden in the Bavarian Alps on 25 April 1945  - almost at the end of the war in Europe, 70 years ago.

The operation involved 359 Lancasters and 16 Mosquitos from RAF Bomber Command's 1, 5 and 8 Groups. LM756 was one of six Lancasters from 619 Squadron, based at RAF Strubby in Lincolnshire, which went in ahead of the main force to check the wind speed and direction, and disrupt the German radar defences by dropping metal foil 'Window'.

According to survivors' accounts they had a clear run at about 22,000ft over their designated bombing target - the SS barracks - but then were coned in anti-aircraft fire and shot down in flames.

I heard about the story when I was contacted by Nottinghamshire Fire and Rescue Service Watch Manager Kevin (Kev) Ruane MBE. He had seen my work and wanted to know if I could make a picture about F for Freddy.

In 2013 Kevin's role in the Fire Service International Youth Leaders Commission had taken him to a small town called Adnet in Austria, a few miles from Berchtesgaden, where he met the mayor, Wolfgang Auer.

Kevin speaks German fluently, having lived in Germany for nine years after serving there in the Army. Burgermeister Auer told him about the Lancaster that had crashed near his town and said he was keen to have a suitable memorial built, inviting members of the crew's families and of the 619 Squadron Association to its unveiling.

At the time neither of them knew that one of the crew - the bomb aimer, Arthur (Art) Sharman - was still alive. He died shortly after, aged 93.

Kevin followed up the conversation by using the 619 Squadron Facebook page to pursue the mayor's  idea and now, two years later, on the 70th anniversary of the operation, it is all about to become a reality. He approached me because he wanted to be able to present a framed print to Herr Auer.

From what I can tell the Lancaster must have been a fireball as it went down onto the mountainside outside Adnet. I chose to portray it part way through the drama, before the starboard wing also burst into flames, so that the squadron codes were still visible.

At this point Art Sharman is descending by parachute in the distance. Flight engineer Fred Cole hangs limply from his: he passed out after being pushed from the 'plane  clutching his bundled parachute, which had inadvertently been opened inside the cockpit.

The man who helped him to get out, wireless operator Jack Speers, is still inside the burning Lanc but is also about to make a successful exit. He was the third and last survivor - the other crew having been killed outright or fatally wounded by the flak shrapnel.

Kevin runs a website about F for Freddy which has considerable detail about the operation, including accounts by the crew who survived. I also had a useful chat about certain technical details with the secretary of the 619 Association, Joe Dutton, who was also a bomb aimer on the squadron at the time. Indefatigable at the age of 91, he was in the process of organising their next reunion, set for this April.

619 Squadron was in existence only from April 1943 to July 1945. It apparently does not even have a squadron crest in the RAF Club and is sometimes referred to as the "forgotten squadron".

Well, not entirely, and I am pleased to have had a small part in honouring the memory of some of the men who did not return. Gone - but not forgotten.