A close-up look at the Battle of Britain Memorial Flight 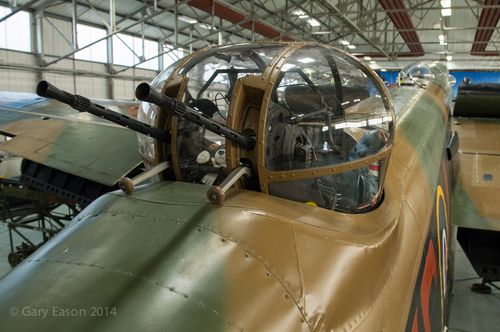 I was standing next to a World War Two Spitfire while one of the few modern pilots lucky enough to have flown it recounted how the engine had emptied of oil while he was doing an airshow display.

We were in the spacious and spotlessly clean hangar given over to the Battle of Britain Memorial Flight (BBMF) at RAF Coningsby in Lincolnshire.

Outside, their engines a crackling roar, Eurofighter Typhoon jets periodically hurtled off runway 25 and up through the lingering morning fog. Inside, the hangar was a haven of methodical maintenance.

Seeing the memorial flight's vintage aircraft up close I can only marvel again at the courage of those who originally flew them in combat. 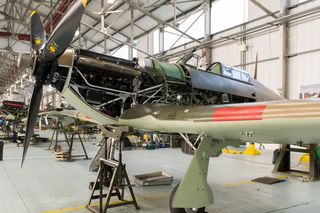 With the outer fuselage skin removed it is all too apparent why the fuel tanks of a Hawker Hurricane fighter presented such a lethal fire hazard to the pilot's legs, stuck forward inside the skeletal tubular framework.

The aluminium alloy skin of the C-47 Dakota looks paper thin to be flown, unarmed, at low altitude over hostile territory with two dozen paratroops and their kit on board. The flight's ZA947 is currently fitted out with the basic metal bucket seats they used.

The rear gun turret of an Avro Lancaster looks impossibly cramped and claustrophobic even for someone in normal clothing, let alone a bulky flying suit and the boots and gloves made essential by freezing temperatures at altitude. I cannot imagine being stuck in there for hours on end in the dark with hostile forces making a point of trying to kill you. 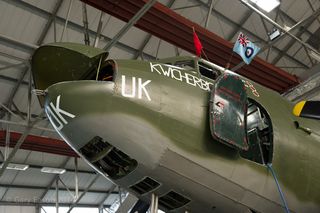 My host for this VIP guided tour was Squadron Leader Clive Rowley MBE RAF (Ret'd), former officer commanding the BBMF. Clive was a Hunter, Lightning, Hawk and Tornado F3 pilot who joined the flight in 1996.

As we looked at the Mk PR XIX Spitfire PM631, its Griffon engine out on a stand and various other components neatly stacked on the floor, Clive pointed to a hose protruding from the forward bulkhead.

He recalled how he had been flying in a display at Southend Airshow in May 2004 when people in the other aircraft alongside and on the ground began telling him over the radio that the Spitfire was trailing oil.

He checked the instruments: all seemed well, oil pressure OK. Thinking "a little oil goes a long way" he was not unduly concerned but decided it wise to make an unscheduled landing on the airfield as a precaution. Good call. As he was about to cross the runway threshold on his final approach, the oil pressure gauge went from normal to zero.

It turned out that a rubber hose connecting two bits of pipework had parted and the engine had lost almost all its lubrication. It would not have run for much longer when he touched down safely.

This was only one of several occasions in his career as a pilot that he was in a potentially disastrous situation, Clive tells me over lunch at the Lea Gate Inn. On a wall at home he has a souvenir piece of English Electric Lightning fuselage with the hole in it made by an exploding engine. 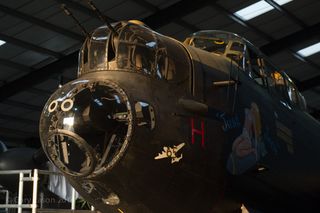 As well as being skilful and brave you also have to be lucky. So "lucky enough to have flown it" is rather double edged.

If you didn't know already, the BBMF hangar is open to the public for guided tours: more information via this link.

You might even get Clive Rowley as your guide - if you're lucky.

And why not make a day of it, as I did, and pop up the road to see Just Jane - Lancaster NX611 - and friends at the Lincolnshire Aviation Heritage Museum, where restoration work continues apace.