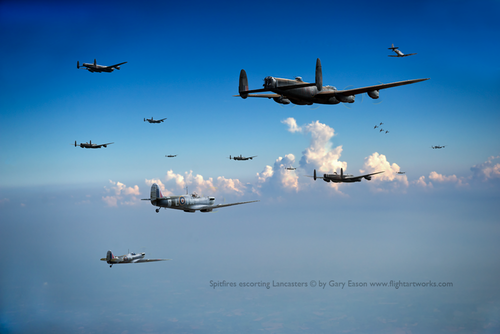 Ever jump to conclusions?

What do you make of the picture above: Spitfires escorting Lancasters? (available via this link).

A typical first response from people who see it is "Cool picture - but of course it never happened".

We all know that it was the American bombers that flew the daylight operations on the Western Front in WWII - supported increasingly by long range fighters when they became available. The RAF's Bomber Command sent its 'heavies' over at night, and they were unaccompanied.

But let's spool back a bit and see how I came to make this picture. Essentially, three things came together.

The first (below left) was a photograph which I made at the Flying Legends airshow at IWM Duxford in 2013. The Battle of Britain Memorial Flight's much loved Lancaster bomber and Hawker Hurricane LF363 in formation. Experimenting with a composition one day I multiplied them and thought the result was rather appealing. Maybe - but completely implausible, so it remained undeveloped in my Sketches folder:

Then I was asked to contribute a number of pictures to a special publication marking the RAF's involvement in D-Day, for the anniversary last June. As part of my research I was reading about how - in light of the Allies' air superiority - Bomber Command dipped its toe back into the daylight operations pool.

Thirdly, in Leo McInstrey's superb book Lancaster I read more about this and how "as the number of daylight raids increased, the Lancasters received fighter cover from the RAF for the first time in the war. 'The Spitfires were a very welcome sight and would accompany you to the target,' said Bob Knights of 617 Squadron. 'They would hang around and see you were all right. ...'."

Well fancy that. My sketch was not so fanciful after all - except that this was not a role the old Hurricane was going to be doing by this time. It had to be Spitfires.

So I realised I was onto something, and it was not something I had seen portrayed elsewhere.

Following the publication of the D-Day bookazine, I heard from the editor that a former Spitfire pilot [update, 2017: the late Tony Cooper, RIP] had said my picture was "just like the real thing", as he had actually done it.

So, the moral of this for me was, keep an open mind - and do the research.