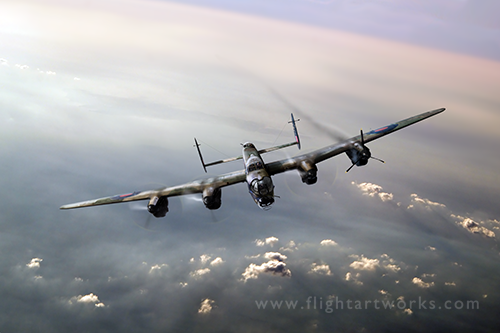 You can imagine my delight at selling no fewer than three pictures in one go to a single buyer.

"My son bought me three of your prints for Mother's Day - two of them from your Dambuster series. Absolutely stunning! I hope to take them with me to the 617 reunion dinner and get them signed by Mr Munro and Mr Johnson. Thank you, Gary."

How cool is that?

A subsequent chat established that she herself had no direct connection with Number 617 Squadron (The Dam Busters) - that was through a friend.

She added: "My father was a rear gunner in Wellingtons. Shot down on his second op and taken POW. All this while still at an Operational Training Unit!"

I have promised there will be a Vickers Wellington picture when I get to it - not least because, as she observed, "the 'Welly' rarely gets a look in" yet it was a remarkably versatile aeroplane, I think the only one of its type in continuous production throughout the Second World War.

In fact I plan a series of pictures of RAF and American heavy bombers from World War II, which do seem very popular. Is this glorifying what are - to be blunt - designed to be weapons of mass destruction? No, it is marking the efforts and in many cases extraordinary skill, ingenuity and sheer bravery of tens of thousands of young men in the most trying of circumstances.

I intend to write a separate post about 617 Squadron. So for now, my heading picture features a solitary Avro Lancaster in the early morning light.