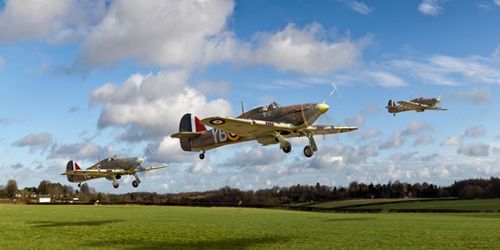 'Another day': Hurricanes from 17 Squadron RAF in northern France, June 1940

You’re thinking I’m daft. Anyone who’s ever seen even an office fan knows what a spinning prop looks like.

So why is it that in almost every photograph you’ve ever seen of a prop aircraft you can not only see but in effect count the propeller blades?

The answer is obvious of course: photographs are a sliver in time and if you are going to catch a moving aircraft without showing it as a blur, you need to have a fast enough shutter speed that it will also ‘stop’ the propeller.

The effect of this will vary with the speed of the prop’s rotation - which in part depends on the different phases of flight - and of course the shutter speed.

So the question that I have been grappling with is: what looks ‘right’?

I want to know because, in a new departure, I am developing a range of aviation-related digital pictures under the Flight Artworks brand.

These are photographically based, but the source material features a motley variety of prop rotations - from the total blur (rare) to the stationary (which looks just silly in my opinion - as if the engine has seized in flight).

I found that, to render them into photographic (or photorealistic) backgrounds it was easier, usually, to recreate the spinning prop from scratch. So I could make it look like almost anything I wanted.

I debated with myself whether to mimic the effect of an artfully chosen shutter speed - good blur but with discrete blades visible - which a crack aviation photographer will usually strive for. Think Paul Bowen, for example: http://www.airtoair.net/gallery/gallery-bombers.htm.

Or whether to recreate what you actually would see if you were right there. After all, in a typical air-to-air scenario, where is the viewer? Hanging somehow in space?

After a faltering start I’ve plumped for the latter. In the Hurricanes image above - with the viewer standing on the ground, I suppose - I started with a single prop blade, painted the tip yellow, and spun it into a circle (this worked better than spinning three blades). Then once it was pasted onto an aircraft I resized it and altered the perspective to fit - and adjusted opacity right down.

[UPDATE: 19 Feb 12]  In response to online discussion of this approach and a review of more photos, I then also added some reflected sunlight 'shimmer'. This needs to be related to the surrounding light but i think it adds a good sense of depth and movement to the props.

But I’m far from being sure about all this. So comments welcome please.